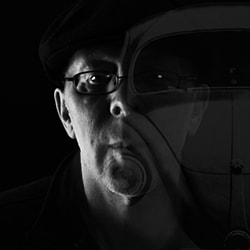 Colin’s first car was a 1965 Ruby Red 1200 Beetle ‘Deluxe’ which led him very quickly to an obsession with all things VW. After studying art and design at Cambridge Art School he relocated to London working in various publishing and graphic design studios.

At the end of the 90s it became clear to Colin during a VW forum chat that there was very little documentation regarding Special Edition Sales Campaign models. As he was now happily embracing the ‘new media’ of the internet SEBeetles.com quickly followed. SEBeetles.com has fast become one of the most popular Volkswagen fan related websites – respected across the world for its comprehensive analysis of ‘the history VW forgot’. But SEBeetles will not accept advertising and hence this website came into being to generate income to keep it online for the benefit of VW fans world-wide. Colin is a very active and well-known across all of Volkswagen related social media.

Since 2019 Beetleness has partnered with Flathead Graphix to exclusively produce t-shirts of officially licensed selected illustrations from Peter Aschwanden‘s legendary ‘How To Keep Your Volkswagen Alive‘ workshop manuals. Beetleness has tried in more recent years to supply fans with new good quality hard to find accessories and art and at the same time provide a 5/5 customer service – built by VW fans for VW fans.

The Beetleness home/office is centered within a very historic motor racing area of west London exactly between the McLaren Automotive/F1 headquarters built in 2003 and the even more historic Brooklands Racing Circuit each four miles away. Brooklands was first opened in 1907 and was the world’s first purpose-built ‘banked’ motor racing circuit and now a museum although quite a bit of the original track still exists. Our product development partner Team Colorado Historic Racing have taken part in the Brooklands Hill Climb events – on Test Hill – with their 1958 rally Beetle ‘Bertie’ in recent years. Brooklands is also the home of Mercedes-Benz World driving experience and exhibition center.  Alan Mann Racing were based at Byfleet five miles away nearby to Brooklands and had a historic relationship with Cobras’ and Ford and their GT40s. More relevant to VW fans is the Speedwell Performance Conversions offices that during the 1960s was run not so far away out of north London. In south London is the Crystal Palace Racing Circuit that opened in 1927 and hosted sports and single-seater races and in 1937 a race was the first ever televised race event. Events still go on there today. Many other classic and sports car manufacturers have based themselves in the area over the years and current manufacturers other than previously mentioned include AC Cars and Caterham.

Our principal place of business is at Beetleness Art, Chertsey, United Kingdom. You can contact us HERE.