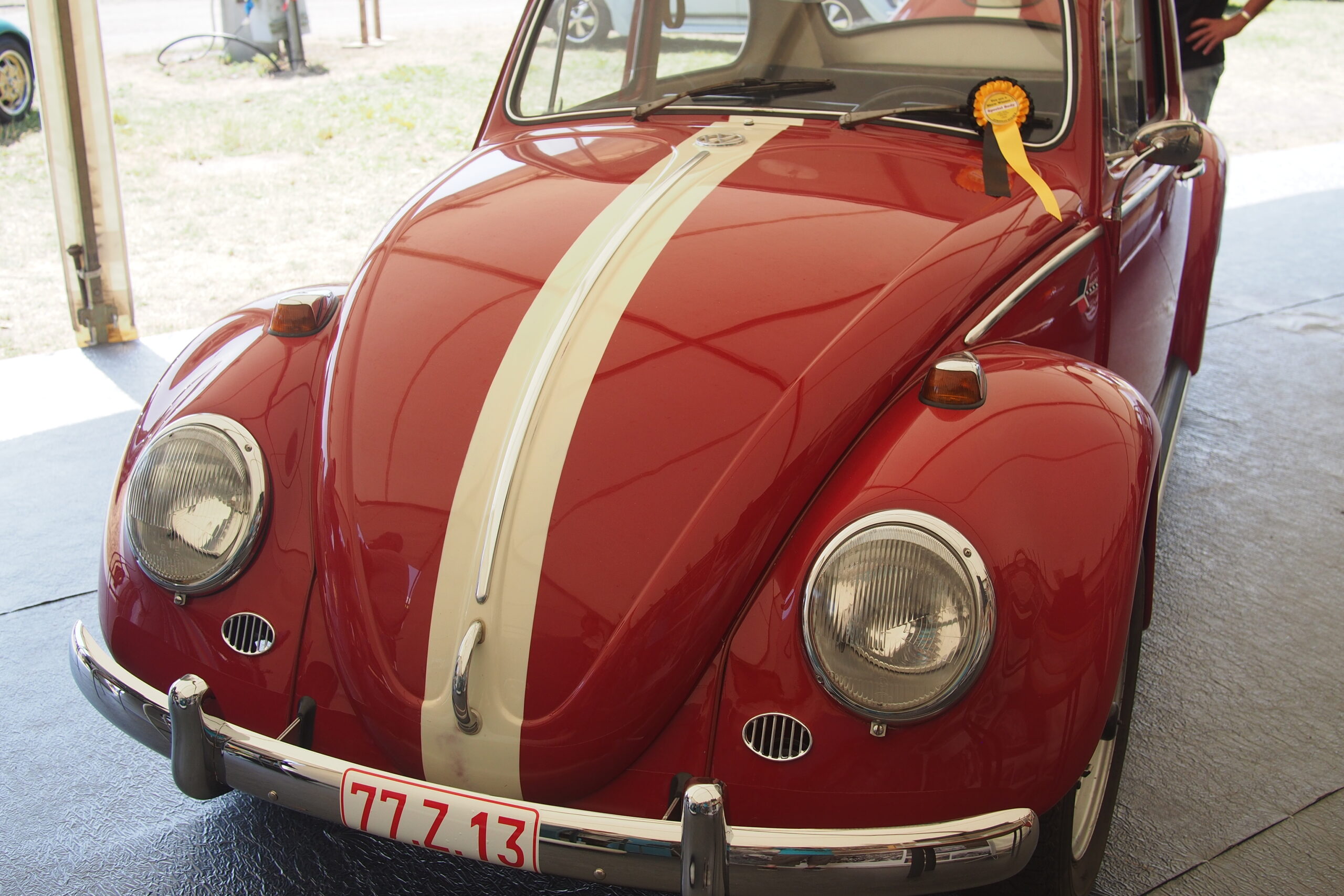 European Bug-In – the most fun a Volkswagen fan can have without laughing.

Many know the history of their cars as initiated by a megalomaniac dictator and designed and then built by automotive engineer genius Ferdinand Porsche. Over the years a British Major and latterly a top US advertising agency helped moved it into legend.

This is the official history – but there is also a parallel history not so well documented. As early as 1961 VW Dealers Brundage Motors in Florida and then EMPI in the California were tuning Beetles as single seater race cars (becoming Formula Vee) and street ‘sleepers’ respectively. In 1963 Volkswagens began to appear on the drag strips in both the east and west coast of the USA, notably with the Schley brothers and their Lightning Bug. Then the ‘Volkswagens Limited’ club was formed in LA which eventually became the ‘Der Kleiner Panzers’ with their own very distinct set of ‘Cal-look’ rules. If Germany is the fatherland of the VW then California is the motherland of the custom VW phenomena.

Crucially the NHRA felt in 1967 they needed to create three classes specifically for VWs (some say because of the embarrassment that these air-cooled German cars were regularly beating their water-cooled nationally produced cars).

The Bug-In shows themselves began in 1968 at Orange County International Raceway (OCIR) California and the events were the chance for custom VW owners to race, show off their cars and for performance manufacturers to advertise themselves. The programme included drag racing, slalom and Show and Shine. These shows ended in 1983 when the OCIR was closed.

Slowly in the ’70s and ’80s the US drag custom scene had come to Europe popularised via magazines such as HotVWs and VW Trends. Inspired by these events and lifestyle Kobus Cantraine, Frederic Peeters and Mike Walravens, all Belgian VW enthusiasts, contacted the original promotors for rights to the name and won it. Thus the first European Bug-In (EBI) was created at Circuit de Chimay in 2007 and the main straight of the circuit was converted into a quarter mile specifically for the event.

Chimay itself is a small town close to the French/Belgium border famous for its Trappist Monk Beer brewery and the ninety year old racetrack. On the EBI three day race weekends the town is almost completely overtaken by VW faithful when attendance can double the 10,000 population.

As for us and EBI #8 I was invited by Mike Walravens to judge their new event category of Special Series. We arrived there in the middle of an unprecedented heat wave. However this just proved to increase the overall attendance and was an amazing site to immediately see so many VWs once inside. Down in the central part of the show owners had arrived and parked in the 600sq/m Show and Shine area. Sedans of all types, vans, dune buggies, Kubelwagen variations. Another area was for the Special Series which included two Belgian D’Ieteren built Mach 1 special editions, a Formula Vee and KIT III tuned Sedan. A very large second hand parts/swap meet and Dealers village was located between the main area and the strip. Walking along the pit lane there were some mind boggling drag cars under preparation glinting beautifully in the morning sunlight. I have no idea where else you could be so privileged to see all these cars grouped together in one spot.

And get this. Once the runs begin you have also have the legend that is MC “Babababa ba baaaa baba baba bababaaa” ‘Dyno Don’ Chamberlain on track excitedly pacing up and down between the cars with his so well informed, witty, enthusiastic, sometimes hilarious commentary/antics peppered with classic rock ‘n roll audio bites over the tannoy. If you dont know about Dyno he has raced and owned, detailed, more than 150 VWs since 1971 and was the voice of the original Bug-Ins’. He was voted in the top 15 of VW Trend’s “Who’s Who of Volkswagen” in 2001 and continues to be a crowd pleaser. This guaranteed there was no let up in the entertainment one bit. What more do you need.

Taking time to look around the show we find legendary cars and guests. Showing for the first time was the Autohaus Bug and the Greg Aronson/Jim Holmes’ most well known Cal-Look car under the ‘Custom v Cal-look’ tent with some of Dave Deal’s original art and Polistil models inspired by it. Also a DKP Memorabilia exhibition. And of course the Schley Bros in attendance; Roger Crawford famous for building some of the fastest racecars around; Ron Fleming (godfather of Cal-look, Underdog) and Greg Aronson – both DKP members since 1969 – as well as Jim Holmes owner of the famous white Cal-look HotVWs cover car.

Can I think of a better VW show I have been to in the last 50 years? No.