S763 Sonderaktion *Big-Bug* was one of three models in the “Käfer der Käufer” Edition presented at IAA’73 (Internationale Automobil-Ausstellung), Frankfurt in September 1973.

The prototype naming was changed to The Big Beetle for series production.

Although the standard Big Beetle Edition was clearly based on the 50bhp “1600cc” 1303 S some were produced as 1303 models with lower powered engines. In Italy for example they were sold with 1200 and 1300 cc engines, the latter having twin Weber carburettors.

Worldwide shipping rates calculated at Checkout. Please note we are UK based and if you choose the International Economy service this can take up to six weeks as opposed to two weeks for the Standard service. Neither offer tracking. We recommend selecting the Tracked and Signed service. Estimated delivery format is DD/MM/YYYY and assumes you have selected International Economy shipping.
SKU: super-beetle-1303-big-hellas Categories: Special Edition T-shirts, T-shirts
Spread the love 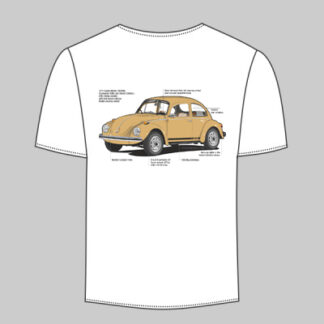